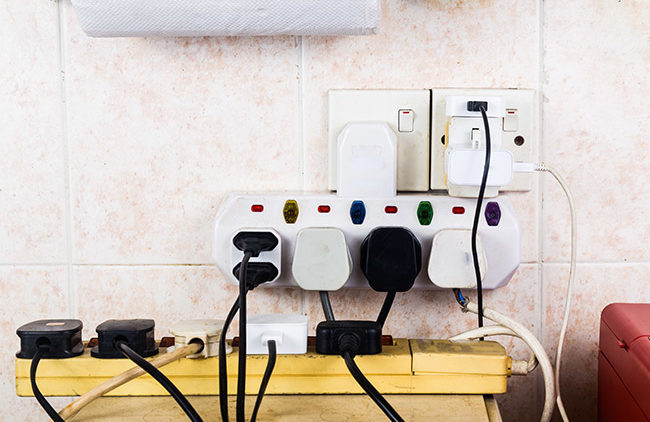 Our lives benefit from using electricity in many ways. However, electricity can also mean danger at home. The United States averages 500 deaths, 1,400 injuries, and property damage amounting to $1.3 billion resulting from 51,000 home electrical fires yearly. An overloaded electrical circuit is the most common hazard; the following will cover how to prevent this condition.

When electricity flows through a wire, it heats up because it resists the flow of electrical current. Two factors determine the amount of heat a wire generates:

• Wire Size – Resistance increases as the diameter of a wire decreases.

• Number of Electrical Devices – The more devices, the greater the electrical current, resulting in higher temperature generated by the wire.

While electrical codes assure safe branch circuit designs, how future homeowners will actually use house outlets can only be estimated. They could still plug in too many appliances and run them simultaneously, causing an overloaded circuit.

Fuses and circuit breakers are located in the main electrical panel. Their primary function is detecting and handling the overloading of circuits and short circuits. If either condition were to happen, they would cut power to the branch circuit, preventing wires from overheating and igniting a fire.

Homeowners may attempt fixing what they mistakenly think is a faulty fuse by replacing it with a larger fuse. This allows an increased flow of electricity into a branch circuit beyond specifications. Frequent fuse blowing or circuit breaker tripping will require the skills of a licensed electrician, who may recommend an electrical panel upgrade or heavy-up.

Plug adaptors and extension cords may also be carelessly used, allowing far too many appliances to be plugged into a single electrical outlet. Using power strips with their own circuit breaker instead would be a smart step in the right direction.

Watch out when there’s crackling or buzzing from outlets or switches or when there’s overheating of appliances and extension cords. Addressing electrical problems quickly will help keep your home and your loved ones safe.