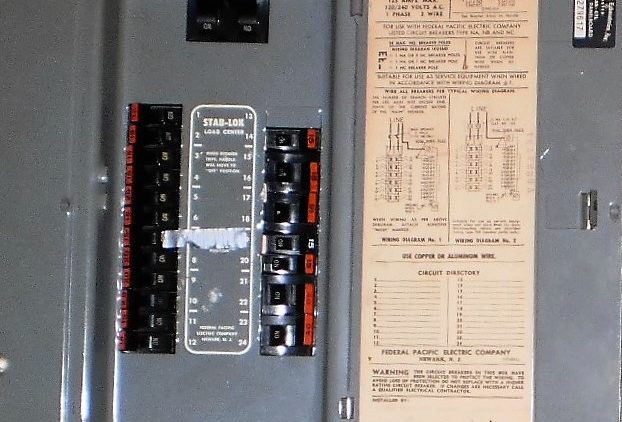 From the 1950s to the 1980s, Federal Pacific Electric (FPE) was one of the top-selling brands of electrical panels in the U.S. Millions were installed throughout the nation in apartments, commercial buildings, condominiums, and houses. Unfortunately, they contain Stab-Lok circuit breakers that are vulnerable to failure, which can lead to deadly electrical fires. If you own a home that was constructed between 1950 and 1990, you should prioritize finding out whether or not it has a FPE circuit breaker panel with the help of a licensed electrician.

Incoming electricity from outside your home goes through an electric panel, which safely distributes the power to every area of the home. Whenever the wiring starts handling too much electrical current, a circuit breaker will cut the power to ensure safety. The most common causes are short circuits, circuit overloads, and external power surges. If a breaker is inherently faulty, the probability of fire in the panel is a latent danger to your home and all those who live inside.

After numerous house fires broke out that seemed to be related to FPE breakers, tests were conducted on them in the early 1980s. Conclusive evidence found that 25% of FPE panels with Stab-Lok breakers were defective. In a 2002 class action suit, the manufacturer was found by a New Jersey court to have committed fraud by falsely claiming their products passed tests, meeting standards that gave them the prized UL seal of approval.

Dr. Jesse Aronstein is an engineer who spent more than two decades on research regarding the FPE Stab-Lok panel. He has also been an expert witness for several trials, testifying about the hazards of the panels and their breakers. He has also publicly advocated for the replacement of all FPE Stab-Lok panels because there is no alternative that is safe and practical. According to Aronstein, well more than 2,000 fires annually are directly caused by malfunctioning Federal Pacific Electric breakers.